Today in Alternate History, a blog giving, each day, the events that happened in several parallel universes:

in 1976, hot off the success of American Graffiti, director George Lucas begins work on a science fiction film that he has written himself, based on old film serials. Unfortunately for him, and everyone involved, the picture runs horribly over-budget and the studio barely advertises it at all. The name Star Wars becomes synonymous with movie failure from that point on.

in 1902, the Vidalia Eddie is introduced. The Vidalia has a small movie screen on it that allows the user to see the output of the Vidalia prior to printing it. This innovation rocks the world and spells the end of Edison's French competitors, who cannot match this technological advance.

in 1953, Elizabeth Windsor, daughter of exiled King George VI, was crowned Elizabeth II after her father's passing. The ceremony, held at the British Government-In-Exile's compound in Washington, D.C. was brief and untelevised. Elizabeth herself lived a reclusive life and would die without returning to England, which remained under Nazi control until her son's return in 1982.

One of the batch of Gmail invites that has recently flooded the streets has ended up in my hands, and hence I've been able to have a look at it.

Aside: This site has some concerns about Gmail's privacy implications. Granted, the somewhat eccentric graphics on the site give off a paranoid-crackpot vibe; however, some of the issues raised are concerning:

If Google builds a database of keywords associated with email addresses, the potential for abuse is staggering. Google could grow a database that spits out the email addresses of those who used those keywords. How about words such as "box cutters" in the same email as "airline schedules"? Can you think of anyone who might be interested in obtaining a list of email addresses for that particular combination? Or how about "mp3" with "download"? Since the RIAA has sent subpoenas to Internet service providers and universities in an effort to identify copyright abusers, why should we expect Gmail to be off-limits?

Does anybody know whether the RIAA or an equivalent agency would have an easier time ordering Google to hand over a list of all people with the words "mp3" and "download" in their mail than they would of ordering an ordinary ISP to give them access to customers' mail spools? (Mind you, the latter happened in Australia; ARIA did get access to student mail at various universities.)

Apple's iTunes has been offering "celebrity playlists", of celebrities favourite songs (well, those licensed for DRM-encumbered iTunes sale, anyway). Not surprisingly, many of them are naff:

The liner notes to wild-eyed rawker Andrew W.K.'s playlist sport a delightful exclamation-point-to-sentence ratio of 1.27-to-1. And I can't think of a better summation of Avril Lavigne than her exegesis of Alanis Morissette's "Ironic": "I love how this song was written with all the different examples Alanis uses of things being ironic."

No surprises either that the hip-hop blingerati's playlists are shamelessly commercial:

Missy Elliott, on the other hand, reveals little. Her liner notes, like her playlist itself, are pure hippity-hop boilerplate: "From ol' skool to new skool, these are some of the hottest songs on the sickest beats ever. Holla!!!" For the most part, iTunes celebrity playlists are unlikely to make anyone holla back. The worst of the bunch are those celebrity playlists padded with the celebrity's own songs, epitomized by the queen of the craven playlist, Beyonce Knowles. Eight of the 14 songs on Beyonce's playlist are performed by her thin-voiced sister, Solange, by her former bandmates in Destiny's Child, or by Beyonce herself.

(Pity that Apple don't publish summaries of the playlists in HTML; I wouldn't mind seeing the Sleater-Kinney and Thievery Corporation playlists mentioned in the piece.)

Mac lust knows no bounds. Now those who can't afford actual Macs can do their Windows XP PCs to look like Macs, with a set of 10 cosmetic programs, from a menu bar for the top of the screen (I wonder whether it strips the menu bars off application windows, or whether it just takes up extra space) and a dock to Aqua-style window frames and icons, giving you something that looks just like a Mac, only with the usual Windows viruses, worms and spyware. Or perhaps that looks just Maclike enough to remind you of what you're missing out on. (via bOING bOING)

Seen through a bus window on a rainy day in North Carlton: 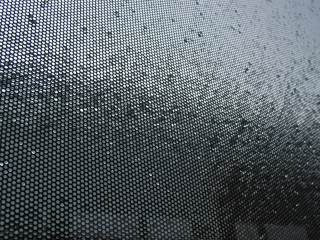 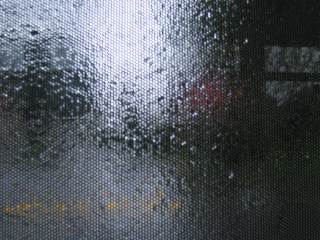