I'm not a huge fan of the This Modern World comic. Perhaps it comes from not living in the U.S., and thus being able to tune out the domestic issues it often covers, or perhaps it's that, more often than not, it tends to smugly preach to the choir and its message can be boiled down to something like "Republicans/neocons/right-wingers are insane, evil doodyheads and they smell, so there". However, the most recent one is a rather keen satire of recent Creationist tactics. 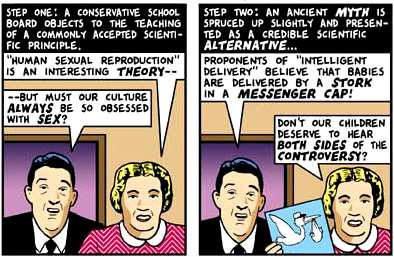 Blogging ambulanceman Tom Reynolds talks about the weather, or, more precisely, about how the weather influences the sorts of accidents and incidents that occur:

If the weather is grey and overcast, we tend to go to more old folk who are sitting indoors, or more commonly, falling over indoors. Sometimes you get the impression that they just want someone to talk to -- or to not be alone. There also seem to be more suicide attempts as well -- and it is fairly well known that suicide rates go up in springtime. So on those rainy spring days you end up seeing a lot of Paracetamol overdoses.

Spring and Autumn rains (and in England, Summer rains) bring with them car vs car collisions, as an infrequent rain lifts off the layer of rubber and pollution left on the road by passing cars and the roads become a skid pan. Fallen leaves on the road don't help, and neither do the effects of the rapidly changing hours of daylight on a drivers bodyclock.

The hot weather also brings out the people who start drinking at lunchtime, and continue throughout the day, tie this in with a lot of sporting fixtures, and we find ourselves going to a lot of fights in a lot of pubs.

If this somewhat Toryish-looking blog is right, unsavoury dictator-fancier George Galloway may forfeit his seat in Parliament:

Problem for him is, that he has not sworn the oath in the House of Commons. He will not be back in London until after the Queen's Speech, which is the deadline when all MPs have to have affirmed or taken the oath.

Unless the Speaker lets him off, if he sets foot on the floor of the House when he gets back, he will be fined £500, and his Bethnal Green and Bow seat would be automatically vacated.

Though didn't Gerry Adams also refuse to take the oath, and manage to retain his seat (not to mention his Westminster office and parliamentary perks), merely forfeiting the right to enter Parliament? In any case, it looks like the voters of Bethnal Green won't get much in the way of democratic representation.

Apparently Radiohead are recording their new album. They have 15 new songs, and the album is expected to be ready for release next year. There's no word on who will release it; Hail To The Thief completed their contract with EMI, and they made noises about going it alone.

Apparently, an external FireWire hard disk beats an IDE-connected notebook drive, or at least the 4200RPM ones. So, if you have a Mac mini and want to make it faster, your best advice is to wipe the internal hard disk and boot it off an external 3.5" drive in a FireWire enclosure; performance will then improve steeply.

Of course, the same considerations come into play for laptops, though one obviously wouldn't want to lug around an external FireWire drive enclosure with one's shiny new PowerBook. Though the author of the article reports good results from swapping his PowerBook's drive for a 7200RPM notebook drive. (Whether or not this is a good idea would depend on how much extra heat a faster drive generates, and what tolerance the design of the laptop in question has for hotter-running hard drives.)

There are now Nintendo Entertainment System and SNES emulators for the PlayStation Portable. Of course, they will only run on Japanese PSPs with the old 1.0 firmware, which doesn't restrict the running of code from the Memory Stick, and that's only until someone runs a game which automatically patches the firmware on the unit.

Let's hope that they figure out a way of getting homebrew code to run on a PSP, as that looks like a pretty nifty platform to run things on.

Some good news for Tube commuters: the air on the London Underground may be equivalent to smoking a cigarette every 20 minutes, but it's still healthier than the air up top. I'm not sure whether that's reassuring or worrying.

The LiveJournal people have unveiled their distributed identity system. Temporarily dubbed "yadis", it's based on FOAF and an AJAX-esque backchannel (though does not need to use AJAX technologies, or even JavaScript), and will ultimately allow sites to accept users authenticated on other sites; it also stands a good chance of somehow finding its way into the next version of SixApart's TypeKey. Update: It has now been renamed "OpenID", and also has a nifty, and somewhat Apple-esque, grey-and-orange icon.