It has emerged that the 7/7 suicide bombers acted alone, working from plans from the internet and financing their attacks themselves. There was no "fifth bomber", and as for the al-Qaeda fixer who indoctrinated them, instructed them in the finer points of bomb-making and flew out a few hours before the bombs went off, well, he didn't exist either.

The upshot of this, of course, is that it is possible for a small group of individuals with a few hundred pounds to make bombs and kill more than 50 people without any help whatsoever. And as long as there are pissed-off people with militant views and beliefs in a glorious afterlife, such things could happen again. As, indeed, could suicide-bomb-based high-school massacres and the like.

Wired has a photo gallery of obsessive Apple fans; that's Apple, the computer company. It seems that there are people who would do all sorts of things to demonstrate their loyalty, from having the Apple logo tattooed on themselves or shaved into their heads to genuflecting in worship outside the Apple headquarters and dressing up as iPods on Halloween. There's even someone planning a nude calendar of fans posing with their Macs, in black and white with the only colour being inside the sacred machines' screens. Dell and Microsoft couldn't buy loyalty like that.

Banksy is back, and this time has gotten into public sculpture. His most recent work of art has been a brutally murdered red phone box, installed in Soho Square: 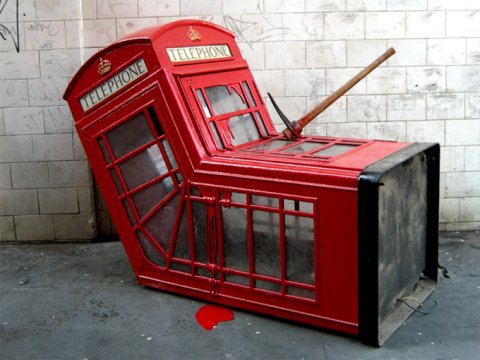 Unfortunately, Westminster City Council don't take kindly to sculptures being installed without planning permission, and, considering it as dumped waste, removed it.

A PR person from British Telecom, however, took a more generous view of the work, and tried to spin it as "a stunning visual comment on BT's transformation from an old-fashioned telecommunications company into a modern communications services provider".