And now, for light relief, here's a cow with its head stuck in a washing machine: 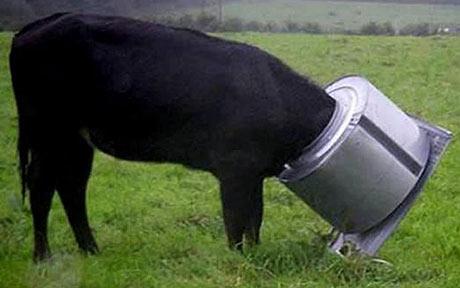 WIRED has a piece by Steven Levy looking behind the scenes of Google's Chrome web browser project:

Because Chrome was supposed to be optimized to run Web applications, a crucial element would be the JavaScript engine, a "virtual machine" that runs Web application code. The ideal person to construct this was a Danish computer scientist named Lars Bak. In September 2006, after more than 20 years of nonstop labor designing virtual machines, Bak had been planning to take some time off to work on his farm outside Århus. Then Google called.

Bak set up a small team that originally worked from the farm, then moved to some offices at the local university. He understood that his mission was to provide a faster engine than in any previous browser. He called his team's part of the project "V8." "We decided we wanted to speed up JavaScript by a factor of 10, and we gave ourselves four months to do it," he says. A typical day for the Denmark team began between 7 and 8 am; they programmed constantly until 6 or 7 at night. The only break was for lunch, when they would wolf down food in five minutes and spend 20 minutes at the game console. "We are pretty damn good at Wii Tennis," Bak says.

Speed may be Chrome's most significant advance. When you improve things by an order of magnitude, you haven't made something better — you've made something new. "As soon as developers get the taste for this kind of speed, they'll start doing more amazing new Web applications and be more creative in doing them," Bak says. Google hopes to kick-start a new generation of Web-based applications that will truly make Microsoft's worst nightmare a reality: The browser will become the equivalent of an operating system.

Google also brought in reinforcements to implement the multiprocess architecture that allowed each open tab to run like a separate, self-contained program. In May 2007, it acquired GreenBorder Technologies, a software security firm whose technology was designed to isolate IE and Firefox activities into virtual sessions, or "sandboxes," where malware intrusions couldn't mess with other activities or data on your computer. When the deal was announced publicly, tech pundits wondered whether it meant that Google was going into the antivirus business. Only after the acquisition did GreenBorder's engineers learn that their job was to construct sandboxes for the tabs of a new browser. "It was confusing," says Carlos Pizano, one of the GreenBorder hires. "They would not say what they wanted to sandbox."

Meanwhile, the Chrome beta's licensing agreement apparently gives Google rights to use anything you create using it for promoting its services. This alarming clause appears, however, to be the result of an oversight; the licensing terms appear to have been copied from Google's web applications, and make little sense for a BSD-licensed open-source web browser (after all, anyone who doesn't like the EULA could produce an EULA-free though otherwise identical version of the browser merely by recompiling it from the source).