Banksy's latest art project, unveiled in New York, is a step away from "street art" and culture jamming and into the territory of conceptual art: he seems to have taken a leaf out of Pascal Bernier's book, and opened a fake pet shop full of grotesque animatronic food-animals, such as walking chicken nuggets.

He added that there was a serious, philosophical aspect to the work, saying: "I wanted to make art that questioned our relationship with animals and the ethics and sustainability of factory farming but it ended up as chicken nuggets singing."

Banksy defended the pet show exhibition even though it contained no graffiti by saying: "If it's art and you can see it from the street, I guess it could still be considered street art."

There's more about it here. 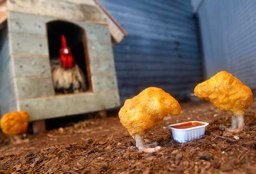 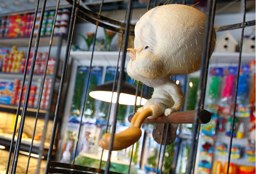 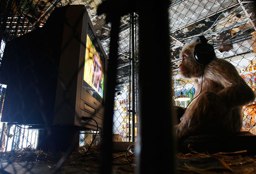 The most serious casualty of the economic crisis has been Iceland. Only five months ago it was hailed as a success story, with its balance of a strong economy, mass affluence and a Scandinavian work-life balance and, apparently, the happiest people on earth. Now the good times are over; Iceland's economy has been devastated by the credit crunch/subprime crisis/opening phases of World Depression 2, banks have collapsed (some of them taking vast amounts of British savings with them), and the nation teeters on the verge of "national bankruptcy".

Some people are calling for Iceland to swallow its pride and join the EU, adopting the Euro. Also, the Icelandic government is reportedly negotiating with Russia for a huge multi-billion-Euro loan to stave off economic collapse. If this takes place, it will be interesting to see what place an Iceland massively indebted to Russia takes on the world stage. For one, will the US air base at Keflavík airport (which has been there since World War 2, generally lukewarmly tolerated) be given its marching orders? (If the Russians are willing to spend big to move it out, I suspect the US would have more pressing concerns on its mind at the moment.) Also, Russia is one of the nations competing for sovereignty over vast (and possibly mineral-rich) stretches of the Arctic; having allies near the Arctic Circle could prove useful to them.

There have been some unexpected upsides to the crisis, though; Iceland's tourist industry is booming, as the formerly unaffordable krona has plummeted. This has also reduced Iceland's notoriously high alcohol prices, making Reykjavík a destination for stag parties and the sort of chavvish tourism the old cities of Eastern Europe have been complaining about. The Icelanders are, as one might expect, also going out, getting drunk and partying like there's no tomorrow. Or like tomorrow will be a lot less fun.

nyway, next week, the Airwaves Festival in Reykjavík kicks off, and here are some MP3s from artists performing there.