A photograph, taken by a flight attendant and submitted recently to an aviation industry forum illustrates the obesity crisis: 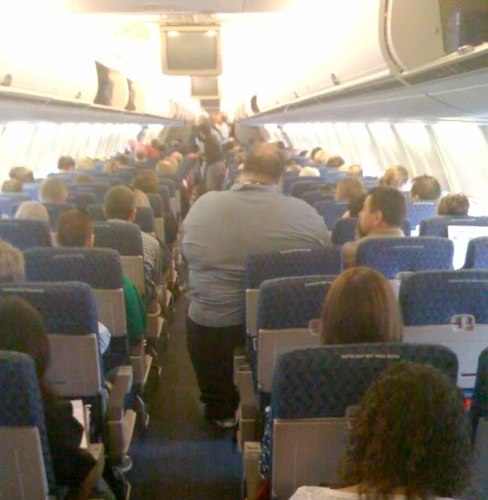 Comments on the forum, from people claiming to have worked with the attendant in question, claim that the flight was fully booked, with no spare seats, and consequently, the passenger next to the plus-sized passenger was bumped from the flight and given a voucher as compensation. This occurred in the US, where it is illegal to bill passengers for more than one seat, even if they don't physically fit into one seat. Mind you, it could apparently have turned out worse:

A good friend of mine had a similar experience sitting next to a guy who was big but I don't think as big as this, for a long-haul flight and was effectively injured by sitting for several hours in a contorted position with his fellow pax half on top of him. The airline that did that to him was utterly unsympathetic throughout a lengthy correspondence afterwards. OK, Emirates since you ask. Ironically my chum is now in a senior position with another carrier.