Seemingly inspired by Turkish strongman Erdoğan's resounding 52-48% victory over the weekend, UK Prime Minister Theresa May has called a snap general election for 8 June, calling a vote to overturn the 2011 Fixed Parliaments Act in the process. With Labour in disarray, the election will almost certainly result in a Conservative landslide and an Erdoğan-sized mandate to reshape the United Kingdom as it leaves the European Union to become a sort of Singapore of the Atlantic; undercutting the decadent vino-drinking continentals with lower taxes, wages and regulations, and a workforce that knows its place (because any other places it could have gone for a better deal have forever been closed off) and making common cause with the world's tyrants, no longer shackled by politically-correct notions of “human rights”.

The Labour Party would nominally be the opposition to the Tories, as they were throughout much of the 20th century, though are not providing much of an opposition. Under the leadership of Jeremy Corbyn, a pre-Blairite socialist once written off as a relic of a bygone era, they have swung firmly in favour of Britain leaving the European Union, whipping their MPs to support Article 50. This is either in an attempt to win back the xenophobic vote or out of some delusional belief in the myth of “Lexit” (left-wing Brexit): the delusion that, having cut its ties with the neoliberal free-marketeers of the European Union, Britain will be free to become a sort of rainy Cuba, a pre-Thatcherite socialist arcadia where the coal mines never closed, the state-run supermarkets only stock one variety of tea, and we're all somewhat poorer and shabbier but equal and happy, all watched over by a cadre of shop stewards in ill-fitting brown suits. On the issue of leaving the EU, there is no difference between the two parties; only on the mythology and teleology of what doing so will signify.

It wasn't always like this, but it was for longer than many would think. When Corbyn ran for the Labour leadership, he was an outsider candidate, put forward half-jokingly next to a field of focus-grouped Blair-manqués struggling to find a selling point for Labour. (One of them actually said that one of Labour's values is “having strong values”; the mutability of those values, presumably, making it easier to respond to polling and market research.) A candidate who actually believed in something—not to mention something as radical as socialism (but not to worry, democratic socialism)—was quite exciting. Corbyn prevailed by a broad margin and saw off several leadership coups (attributed to either traitorous neoliberal Blairites or ordinary Labour MPs questioning their new leader's ability to actually lead, depending on whom one listens to); he is currently presiding over the “regeneration” (and, inevitably, downsizing) of Labour into a more traditionally leftist direction, albeit without the benefit of shipyards, steelworks and mines full of dues-paying industrial workers to provide a natural constituency for a party of labour. (Labour, of course, started as an offshoot of the union movement, a parliamentary party for those whose stake in the system was their labour, rather than property or pedigree. This raison d'être began to diminish with the shift away from heavy industry, which started in the 70s but accelerated under Thatcher; by the 90s, it was a ghost of its former self. It was mostly Britpop-fuelled euphoria and/or Tony Blair's Bonoesque charisma that kept Labour going, with New Labour's Tory-lite policies attracting a critical mass of centrist careerists who wouldn't have touched socialism with a bargepole, and whom Corbyn is now doing his best to purge. That and Thatcher having tested the hated Poll Tax in Scotland, delivering virtually that entire country to Labour, in time for it to shore up Blair's successive administrations; though the Tories shrewdly wiped this out by convincing Labour to lead the No campaign against Scottish independence, and so deliver their entire base there to the Scottish National Party, effectively holing Labour below the waterline. So, in summary, the revival of Labour in the 90s was about as substantial as the revival of Swinging Sixties cool that the music journalists of the time were going on about the latest Blur/Oasis/Elastica single being the epitome of.)

The problem with this new direction for Labour is that it jettisons many of the tenets of liberalism and openness. Corbyn made only the most half-hearted and token attempts at campaigining to remain in the EU, and once the result was in, enthusiastically jumped to the victorious side. Protectionism trumps openness; nationalism trumps solidarity. 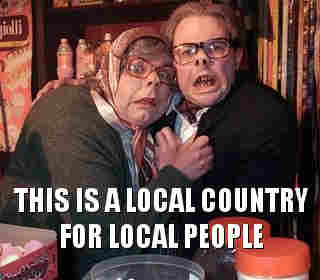 The traditional anglosocialist utopia of Labour looks a lot like the traditional Little England of UKIP, with its distrust of all things foreign; the only difference is, in one case, there is a strict hierarchy, with everyone knowing his or her place, whereas in the other, everybody's equal (though some are more equal than others; every socialist utopia needs its cadres and vanguard party, after all). As neoliberalism dies, it's the “liberalism” part that is jettisoned; the hierarchies of oppressive power continue, as they always have. (Similarly, across the centre-right parties and think tanks of the world, the dry, bloodless academic writings of Hayek and Friedman are quietly being bumped from reading lists, replaced with Julius Evola and translations of Aleksandr Dugin; Ayn Rand, however, retains her popularity, her message of the inherent rightness of power and privilege, predating the Mont Pélerin Society, will outlive the myth of the tide that lifts all boats.) That Labour is facing electoral slaughter is not much comfort, given that the result will be the coronation of an authoritarian unelected leader into a position of unassailable power to remake the United Kingdom in her image; our own Lee Kwan Yew, or perhaps a British Erdoğan.

I currently live in the electorate of Islington North. Jeremy Corbyn is my constituency MP, and I voted for him in the last general election, as he was a fine constituency MP. However, he has not shown himself to be a plausible party leader, and after his betrayal on Brexit, I will not be able to vote for him in the upcoming election. I am thinking of voting for the Lib Dems; they are the largest party standing against Brexit and its attendant xenophobic isolationism, and the most likely to unseat Corbyn in liberal, cosmopolitan Islington North. Ordinarily, I would consider the Green Party, or the Pirate Party if they ran here, but in this election, and under the first-past-the-post system, it is important to vote for the lesser evil rather than treating electoral choice as a litmus test of purity of convictions. (See also: Jill Stein, the US Green Party candidate whose electoral messaging seemed almost precisely calculated to undermine Clinton and get Trump into power.) And right now, with the two largest parties offering two different variants on the same Scarfolk-meets-Royston-Vasey dystopia, the role of opposition and/or lesser evil has fallen on the Liberal Democrats.