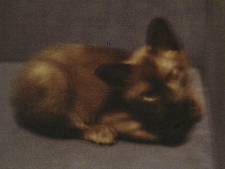 I just got my Christmas presents from most of my immediate family, and they amounted to two items: a dressing gown, and (from various people together) a kitten and various related paraphernalia. It's currently lying on my lap, for the moment having given up on attacking the keyboard or trying to climb on the desk (which is off-limits).

As yet I don't have a name for him; had it been a female cat, I'd probably have named it Olympia, after the song by Lush. However, I've no idea what to name this little rascal.

(And yes, the pronoun thing is a bit confusing. I'm a bit hesitant to refer to cats as "he" or "she", as that would seem a bit anthropomorphic (I know that cats are male and female, but they're also asocial solitary predators (at least in the wild), and thus don't have the sexual division of labour, as it were, to differ much. I love cats, but I don't categorise them as people (or mentally story information about their sex), so I usually find myself referring to them as "it". However, giving a female name to a male cat (or vice versa) would just seem wrong.)

(He's a Burmese, in case you're wondering.)

I'll name your cat, do not fear. The Burmese choice is very clear. Burma shave.

Call it "it" for a few days, until you think of something good. (Yatima from Diaspora, perhaps?)

Anyway, I got hysterically sensible but useful presents, (aside from a loud shirt) and I'm happy with that.

Pfft it ain't anphromorphism; gender has to do with the structure of chromosomes in every cell of the body; any "socal roles" are a byproduct of that. Hence, "sex change" operations are a complete misnomer; you might have all the appropriate dangly bits, but every cell in your body still knows what sex it REALLY is. Besides, you'll know a male cat when you smell one...

Actually, sex has to do with chromosomes, and gender has to do with word category (some languages have genders for inanimate objects, things belonging to the Emperor, etc.), though gender is often used as "socially constructed sex role".