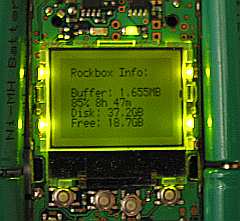 There are 2 comments on "Archos Jukebox hard disk transplant":

I have so far only managed to fill <8 gigs on my 40 gig iPod. How much of your 40 gig capacity is filled already? I figger even if I erase nothing, I won't fill the device up for at least the next five years of music buying/downloading.

57%, as of last night (after copying about a dozen recent acquisitions, and things previously deleted to make room, to it). Mind you, I usually rip MP3s using lame --preset standard, so things vary between 150 and 240kbps.