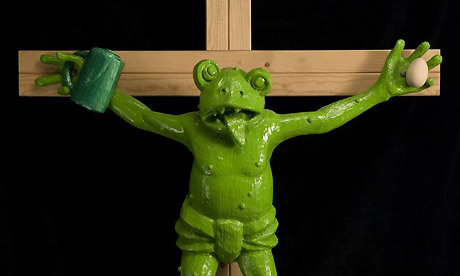 There are 5 comments on "Zuerst die Füsse":

People do not have the right to not be offended.

Damn right. Or actually they have the right to choose not to be offended. If they choose to be offended, that's their responsibility and no-one else's.

For what it's worth, I *am* offended ... but that's my business. I've certainly no right to insist that any given gallery take pains to avoid offending me or those with my religious views.

(Besides, Christian-baiting is a popular sport in this day & age. If we got up in arms, Jyllands-Posten style, every time someone did something we could argue was blasphemous, we'd never get anything done. And we'd get a well-deserved reputation for being precious wowsers. Yeah, er, no thanks.)

I don't see this as "Christian-bashing", but rather as using the story of the Passion, an integral part of European cultural history, as a metaphor for the contemporary human condition. Piss Christ this is not.

I am offended, and there are reasons to justify this piece of art taken off. You see,amongst human rights there is a right to the safekeeping of my honor and dignity. As a catholic, I have chose catholicism, of course, thing is, nobody has a right to mock or insult anyone, that is never justified (unless you wish to go against the declaration of human rights) and so I ask you: ¿are artists super humans that go beyond the law and order set by society and democracy? I belive the church has a right to take this to the law (since giving them the power to simply ban it is of course, absurd) nad make a stand against what clearly is an insult.. can you not see the resemblance with Jesus Christ crucified? Don't mess with me.