Something to do this Valentine's Day in London: anarchist speed dating, organised by hardcore anarchist group Class War, no less:

Anarchist literature will be on sale all through the anti-Valentine's evening. And entertainment will be provided by punk bands with such names to set the heart a-flutter as Active Slaughter and Headjam.

The BBC piece, of course, starts with the "Anarchist speed dating? What a laugh." angle; after all, in the eyes of the tabloid-reading public, anarchists are nihilistic thugs who like smashing stuff, and the idea of them engaging with romantic love is a piece of wacky juxtaposition. The piece is, to its credit, quite sympathetic to the anarchist position, and goes beyond the stereotype:

He doesn't mind if that somebody is "a boy or a girl, as long as they're pretty". And he doesn't find anything strange about agitators being equally committed to bringing down the system and finding companionship.

"From a distance, when you think of anarchists you think of big boots and fighting with policemen," he says. "But all the ones I've met have been very nice, very committed people. They believe in something and they want to find love, just like everyone else. Why would that surprise anyone?"

A group of squatters has taken over an opulent property in Mayfair. The Da! Collective plans to turn 18 Upper Grosvenor St., a Grade 2-listed property near Hyde Park, the US Embassy and some of London's most expensive restaurants, into an art installation:

Behind the white pillars and imposing wooden door of the grade II-listed residence, the 30-plus rooms are now scattered with sleeping bags, grubby mattresses, rucksacks spilling over with clothes and endless half-finished art installations. While their neighbours' walls are lined with priceless paintings, No 18 now exhibits a room full of tree branches and another with a pink baby bath above which dangle test tubes filled with capers. Spooky foetuses line one fireplace.

hey had been watching the building for "at least six months" before they decided to try moving in, she said. "We had put tape on the keyhole, and kept looking through the letterbox to see if anyone had been there." Then, one October night, five of the group decided to go in. Some of them wore high-visibility jackets to look like builders; Smith had a clipboard and fur coat. They propped their rented ladder up against the front of the building, and one man climbed on to the dilapidated balcony. "I went across to the window and I couldn't believe it when it was unlocked," said the squatter, who declined to give his name. "I was so happy. We didn't really expect it to be open, so it was a really exciting moment."

The group has had a mixed reception from the other residents of Upper Grosvenor Street. "Our next-door neighbours have been really nice; they've even let us use their wireless internet," said Smith. Another neighbour, a man called Alexander, has offered the services of his maid to cook them food, she added.

From 7pm to 11pm, the Da! gang will be projecting images on to each of the 19 windows at the front of the squat. "It's going to look like a doll's house," said Smith, "and there is going to be a harpist and a cellist and performance artists."

Under English law, the squatters (who have reconnected the electricity and claim to be maintaining the property and paying bills) are entitled to stay until they are formally evicted by the owners. These owners, a concern known as Deltaland Resources Ltd., based in the British Virgin Islands, do not seem to have made any attempt to contact the squatters; they have 11 years and 11 months to do so before the building legally becomes the property of the Da! Collective.

The Make Blog links to a DIY idea for the urban anarchobicyclist: the "automatic bicycle pump", a tool for filling your bicycle wheels with "conveniently available pressurised air stored in automobiles": 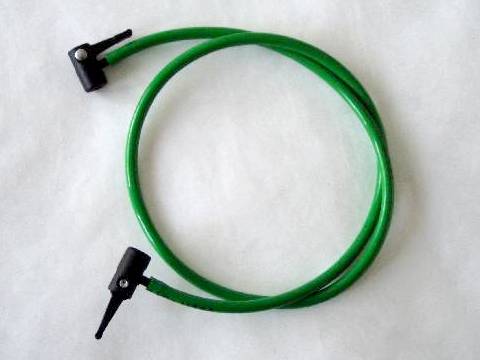 Unfortunately (or fortunately, depending on your point of view), it probably won't work in practice, as bicycle tyre pressures are higher than those of car tyres.

After three decades, veteran American fringe publisher Loompanics is closing down, and is liquidating its entire catalogue at half price. Their works include from conspiratological alternative history, anarchism, atheism, Satanism, extremism, visionary/crackpot ideas, drug literature, criminal how-tos (for educational purposes only, of course), various 1960s-vintage utopianisms, and a lot of freaky shit; well-known titles published by Loompanics include the Principia Discordia and How To Disappear Completely.

A survey of Anarchist and Libertarian Societies in Science Fiction; encompassing everything from Stateless to Libertaria to Port Watson, including pirate anarchist utopias, Randian-Heinleinian gun-toting anarcho-propertarianisms, the psychedelic milieus of Burroughs and Robert Anton Wilson, H.G. Wells' Fabian socialism and the "fascist-socialist" utopias of H.P. Lovecraft's alien races.

I found this on this page of essays, which is a few links away from Ken MacLeod's blog. The page has a number of other intriguing essays, including one on Christian symbolism in Blade Runner and Iain M. Banks' notes on the Culture, his post-Singularity anarchosocialist utopia.

During the Spanish civil war, anarchists inspired by surrealist and abstract art developed torture cells based on non-figurative art and the psychological properties of shapes and colours:

Beds were placed at a 20 degree angle, making them near-impossible to sleep on, and the floors of the 6ft by 3ft cells was scattered with bricks and other geometric blocks to prevent prisoners from walking backwards and forwards, according to the account of Laurencic's trial. The only option left to prisoners was staring at the walls, which were curved and covered with mind-altering patterns of cubes, squares, straight lines and spirals which utilised tricks of colour, perspective and scale to cause mental confusion and distress. Lighting effects gave the impression that the dizzying patterns on the wall were moving.

The surrealistic cells were used to torture Francoist Fascists, as well as (of course) members of rival leftist factions and splinter groups. (via Charlie's Diary)

(If they built something like that these days, mind you, they could probably pass it off as the latest clubbing sensation and charge admission for it.)

Comedy Festival: Tonight I went to see Cyderdelic. They're a UK comedy outfit whose act is being a mad anarchist outfit/sound system, probably inspired by Chumbawamba, the KLF and the anti-capitalist movement. They played some ravey musical numbers (which were mostly prerecorded; or at least, the Roland S-50 on stage wasn't plugged in), slapped each other around, ranted hyperbolically (at one stage arguing heatedly over whether an animal-research lab experimented on badgers or budgies) and showed videos of their antics at various demonstrations. The show finished with them leading the audience out into Swanston St., megaphone in hand, and proceeding to blockade taxis whilst chanting "we all live in a fascist regime". Classic.

They take things so much more seriously over in Europe. While Australia's local dreadheads are planning to spend May 1 doing impressions of that peasant guy from Monty Python and the Holy Grail, an anarchist group in Britain has been training its members for violent paramilitary tactics. Or had meant to, had Scotland Yard not demolished the disused factory they were using as a base. The group, calling themselves the Wombles, are an offshoot of an Italian anarchist group which hijacked and torched a train last year and has been behind many violent demonstrations across Europe.

Detectives are increasingly worried about a significant outbreak of violence being planned for May Day. Det Supt Randall said: "Last year's demonstration was largely organised by Reclaim the Streets, which is a peaceful organisation, although there was trouble. This year the organisation has been overtaken by far more violent groups."

That seems to be happening here, with hard-core Marxists having pretty much taken over anti-multinational activism. (If you don't believe in the need for a revolution, the abolition of private property or that Cuba is a workers' paradise, you can't call yourself "anti-corporate" these days.) Makes me wonder whether they're not secretly funded or otherwise promoted by strategic consultancies in the employ of multinational corporations, in order to paint anybody worried by the concentration of power as One Of Those Nutters.