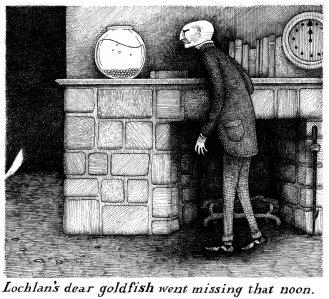 A somewhat arty photographic interpretation of Edward Gorey's Gashlycrumb Tinies; well, half of them anyway. (via Owen)

I just found out that, at the time of his death, one of the projects Edward Gorey had lined up was the illustrations to a new edition of Borges' Book of Imaginary Beings. It's a real pity he never got to do it. (via MeFi)

Another thing to see if I visit the US: the Edward Gorey museum, in what was his home in Cape Cod. He was quite a character, it would seem. (note: link requires registration, but not a working email address.) (via bOING bOING)

Old, but worth reading: When Edward Gorey passed away a few months ago, the Guardian published an interesting article about his influences and various works.

The Edward Gorey fan site may be gone, but there's a copy of the Gashlycrumb Tinies here.

A good profile of Edward Gorey, published in Salon some months ago; being rerun in tribute.

Edward Gorey, creator of the Gashlycrumb Tinies and influence to many that followed him, has passed away. (I'd have linked to the tribute site here, but, unfortunately, the lawyers had it pulled.)

A piece on Edward Gorey, including a small gallery of his illustrations: (Salon)

In fact, Gorey's work is formatted very much like an incredibly baroque storyboard for a silent film. Each vignette alternates between panels of painstakingly ornate hand-lettered text and black-and-white illustrations. Like silent film, the juxtaposition of image and text allows us time to consider both, as separate but inseparable parts of the same work.