Here you will find an electroclash cover of Joy Division's She's Lost Control, with vocals by Siobhan Fahey. It's credited to "Agent Provocateur", which is not the name of a new Client/Adult-style electrocoolsie duo, but actually refers to the British lingerie chain, who apparently commissioned it as a promotional item or somesuch.

Which takes the idea of corporations as authors and music as a work for hire to a new level. Well, not entirely; apparently, one of the biggest pop groups in Thailand a few years ago was an enterprise owned and operated by PepsiCo., with musicians, songwriters and personnel hired by corporate managers, and then there was the extended mix of that Coca-Cola jingle which was in the charts in the 1990s. Or perhaps it's more like sponsorship; the track has no references to the brand or lingerie (though could perhaps be a suitable soundtrack to BDSM games whilst wearing such), and sounds much like the usual sort of hard-edged electrohouse you'd hear in Prahran or Hoxton or wherever the beautiful people congregate in their punk-themed designer clothes. 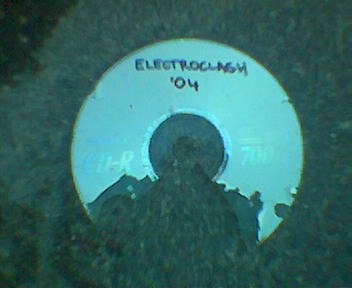 After listening to albums from Miss Kittin & The Hacker and Adult, I have realised that the lyrics of your typical electroclash song are stylistically very similar to KOMPRESSOR lyrics; i.e., all disjointed, monotonous assertions with scant regard for scansion or melody and the odd bit repeated for effect. In fact, if he did away with the distortion pedal, Andreas K. could easily hop on the electroclash bandwagon.

The Great Electroclash Swindle, or how to be electroclash in a few easy steps. (via Graham)

This last microtrend -- effectively a re-revival -- highlights one of the ironies of the 80's resurgence, for the 80's were the first era in pop in which recycling and retrospection became rife. There were vogues for ska, rockabilly, psychedelia and other musical antecedents. "With 1980's retro, we have reached the point of second-order recycling," said Andrew Ross, a cultural critic who is the director of the American studies program at New York University. "It's the equivalent, God forbid, of double quotation marks."

Modern digital technology is so sophisticated that producers make electronic music that sounds almost as if it were played by a live band, full of subtle rhythmic irregularities that create a humanlike feel and jazzy swing. But just as punk rockers embraced a raw, elemental music, rejecting the overproduced sound of 70's rock, today's electro groups use old-fashioned synthesizers and drum machines. They prefer cold tones and stiff beats because they evoke a period when electronic music seemed alien and forbiddingly novel. They are making machine-music and proud of it.

For many clubgoers, the 80's were a time when rock and dance music were in lively conversation with each other. Club music then was full of punky attitude and personality, a stark contrast to the functional music and faceless D.J.'s who dominate today's post-rave dance culture.