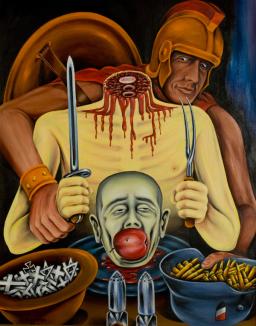 Life imitates Christopher Brookmyre novels: a nurse in Britain is on trial for being somewhat overzealous in tackling the bed-blocker problem, to the extent of attempting to hasten several patients' journey through death's door. In her efficiency drive, Barbara Salisbury is alleged to have given patients overdoses of diamorphine and withdrawn their oxygen supplies.

Salisbury, who was described by the prosecution as an experienced, capable and efficient nurse, is accused of attempting to murder Frances May Taylor, 88, in March 2002 in that she inappropriately administered diamorphine using the syringe pump, telling a colleague: "Why prolong the inevitable."

She is accused of attempting, 10 days later, to murder Frank Owen, 92, by instructing another member of nursing staff to lay Mr Owen on his back, allegedly adding: "With any luck his lungs will fill with fluid and he will die."

I wonder whether (assuming that the charges are true, of course) she was acting out of a personal cruel streak, or whether this is merely the most extreme manifestation of an institutional focus on patient turnover in the Thatcherite/Blairite health system in Britain (as was the plot of Brookmyre's Quite Ugly One Morning; though, granted, Brookmyre seems to write from a Scottish-socialist point of view).

New claims have emerged that the Queen Mother, who died in her sleep last year aged 101, was euthanased with a massive dose of heroin. It is claimed that she saw it as her duty to avoid dying at an inappropriate time (such as her daughter's jubilee), and thus elected to die a "mercy death" beforehand. Euthanasia is somewhat of a tradition in the British monarchy; the terminally ill George V. was euthanased with cocaine and morphine, so that his death would make the morning papers rather than the "less appropriate" evening ones. Nonetheless, royalists are outraged by the allegations. Euthanasia and assisted suicide are currently illegal in Britain, with terminally ill commoners forced to travel to places like Switzerland to die with dignity.

The Church of Euthanasia (which is like a cross between VHEMT, the Church of the SubGenius and something Jim Goad or someone could have come up with) has a new video out. Titled I Like To Watch, it splices footage of the WTC attack with pornography and sports coverage, over an electronic soundtrack, all to make a statement:

"I found it very beautiful." He continues: "I don't believe that I'm the only person in the world who derived sexual gratification from watching two of America's tallest buildings destroyed, but I do believe that I'm one of the few people with the courage to admit this in public. As an artist, I have an obligation to capture my feelings as accurately as possible. What I'm feeling may make me a monster, but I don't believe I'm alone in being a monster."

Australian euthanasia advocate Dr. Philip Nitschke (he of the Laptop of Death and the floating euthanasia clinic) has come under attack from religious-right group Right To Life for his eminently Darwinian idea of making suicide pills available to angst-ridden teenagers. (The Darwinian implications of allowing depression-prone people to easily kill themselves, though, bear some thinking about; imagine a planet of Shiny Happy People, the descendents of those genetically predisposed towards contented apathy.)