Read: Mister Wonderful, a graphic story by Daniel Clowes, dealing with modern alienation, though this time in middle age. 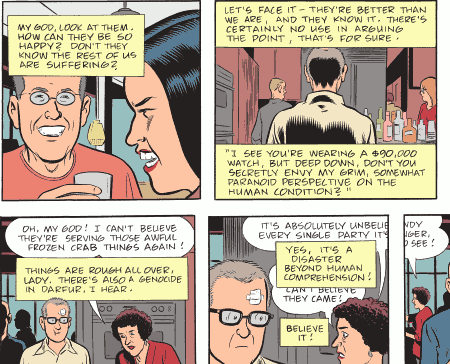 Interestingly, the PDF files contain the unrasterised line art; when OSX Preview shows the pages, it draws it in layers, first the neat shapes of colour, then outlines and shading, then speech/thought bubbles and text.

The battle for domination between the Baby Boomers and Generation X is being fought in the realm of fashion:

Generation X, he said, had been hoodwinked by boomers into embracing their ageing culture. Popular culture is still stacked with fading sex symbols such as Pierce Brosnan and Mel Gibson. Black, a slimming colour, has been in vogue since the boomers began getting corpulent in the mid-1990s. Buzz cuts became de rigueur when balding 40-something men decided anything was better than a comb-over.

He said a fashion revolt had been spearheaded by the daughters of the boomers - generation Y - who began to flaunt their toned midriffs at the turn of the century. Future male generation Y trends might be body-hugging lycra in pale colours with patterns or hairstyles that can't be worn by balding men.

Apparently the black rectangular glasses worn by emo hipster types are also a baby-boomer baldness-camouflaging device, and too will disappear as we welcome our new buff, tanned Generation Y overlords, along with such 1960s trappings as zen and meditation.

I wonder, though, what this means for music. The rise of hip-hop/R&B into dominance of the charts could bear out this trend (the resurgence of 1970s-style rock goes against that; though perhaps those are the last death throes of Boomer-dominated pop culture?). In the indie sphere, classicist Beatles/Bacharach-inspired pop could give way to glitchy electropop made with laptops. The (late) boomers' punk-rock DIY aesthetic could give way to the UK Garage PlayStation DIY aesthetic. And with the backlash against wearing black, things don't look too good for goth, do they?