The 13th of October has been designated John Peel Day; there will be more than 300 tribute gigs to Peel across the UK. (It remains to be seen what proportion of these carry on the spirit of Peel's eclecticism and championing of novelty more than, say, last year's "Future's Burning" compilation of "tight", "angular" NME/Xfm-formula "new-wave" "indie" "garage" "art rock", which was, perhaps rather opportunistically, dedicated to the then recently deceased Peel.) There will also be events in Europe, North America and New Zealand on the day.

The day before, there will be a tribute concert in London featuring New Order, The Fall, the Super Furry Animals and a reggae outfit named Misty In Roots.

The Rockall Times (named after the windswept North Atlantic island of Rockall) is a sort of British version of The Chaser, with stories like Bin Laden video fails to wow critics ("The Times said it "lacked intellectual rigour", the Telegraph slammed bin Laden's performance as "lacklustre" while the Mail on Sunday used stills from the performance to illustrate the dangers of predatory, swan-roasting Albanian paedophiles."), Suicide bomber decimates London radio station ("Playlist destroyed, one dead") and Clairvoyant channels John Peel's tribute fury:

"Has my legacy taught them nothing?" Peel allegedly said via his Romany conduit this afternoon. "Everyone knows Teenage Kicks is my favourite single. Unfortunately, I've heard it 317 times since 2pm last Tuesday and it pains me to say this I'm beginning to go off it a bit. There are thousands of records you could play to pay me tribute not that I entirely deserve all this, mind, it's all a bit embarrassing from Beefheart to the White Stripes. Or the Fall. I really like the Fall."

Unsurprisingly, the world of politics has not been slow in eulogising Peel's legacy to popular culture. When asked whether Peel's championing of Progressive Rock, Belgian Techno, Grindcore, Gabba, Lithuanian speed garage and world music had influenced their formative musical tastes, every MP we quizzed replied "Er... yes, absolutely. Did I mention how much I like Teenage Kicks by the Buzzcocks?" 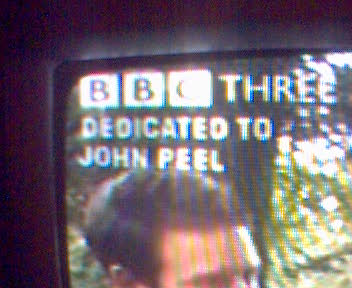 Veteran BBC broadcaster John Peel, who, over four decades, has shaped the face of rock and pop music, has died whilst holidaying in Peru. DJing on BBC Radio 1, Peel was responsible for bringing a great many bands, including Joy Division, The Smiths and Stereolab, to the public's attention.

Via The Fix, a big list of links to MP3s of tracks played on the John Peel show, from artists including Mogwai, Hefner, Set Fire To Flames, Trembling Blue Stars, Solex, King of Woolworths, Kid 606, Low, The Aislers Set and more. They're not MP3s of the actual Peel sessions, but of original recordings, as released by the artists or their labels.

And some more MP3 links: Mogwai live, Radiohead live. (via someone calling himself Das Katerer.)