Former Australian defense minister Kim Beazley has revealed that the Australian security services cracked US a defence code in the 1980s, to enable them to reprogram their US-built Hornet fighters to identify potentially hostile aircraft. The Hornets, you see, were shipped pre-programmed with the profiles of Warsaw Pact aircraft, of which there weren't many in the Asia/Pacific region, and thus would have been somewhat less than useful when faced with, say, Indonesian or New Zealand fighters. This setting was impossible to change without top secret codes, which the US promised to provide but somehow never came up with. Given that there's no consumer complaints commission that can order the return of jet fighters should they prove unfit for purpose, the Australians (which, presumably, means ASIO/ASIS/DSD) did the only thing they could: they spied on the Americans and stole the codes. What happened to whoever authorised the purchase of the aircraft without ensuring that they were fit for purpose is not known.

"In the end we spied on them and we extracted the codes ourselves and we got another radar that could identify (enemy planes).

Mr Beazley said the Americans knew what the Australians were doing and were intrigued by the progress they made.

I wonder whether the Australian department of defense has learned enough from this to demand the source code to the Joint Strike Fighter, as the British are doing. Or whether, indeed, Australia has the clout to make such requests.

The Israeli government, realising it has somewhat of an image problem in key tourism markets, has decided on a possible solution: pictures of h0tt soldier chyxx in their underwear, in the lads' magazine Maxim:

In the magazine, one of the women, Yarden, describes how she enjoyed firing her M16 rifle before she entered the military intelligence corps, while Nivit says her job in intelligence was so secret that she cannot talk about it. There is nothing military about the photographs, however, which are taken in different locations in Tel Aviv

Israel is keen to sell itself as a western country with beaches and nightclubs rather than a country full of religious zealots which has been in a permanent state of emergency since its creation.

Needless to say, not everyone's happy with this.

The US military has given the world a number of things: the internet, GPS, and now, it turns out, San Francisco's gay scene:

During World War II, the United States armed forces "sought out and dishonorably discharged" homosexuals. Many men who were expelled for being gay were processed at San Francisco bases.

This site agrees, stating San Francisco was indeed a point of departure during World War II. Gay men often stayed in the city after completing their military service. Since then, San Francisco's gay and lesbian population has continued to grow.

Found whilst looking at the Wikipedia article on Jon Ronson: the First Earth Battalion Field Manual, as mentioned in The Men Who Stare At Goats. Imagine an artefact from a parallel universe or a Robert Anton Wilson novel where, for a time in the late 1970s, Timothy Leary ran the U.S. Army, and you'll have some idea of what it is.

I just watched the first part of Crazy Rulers Of The World, a documentary series by Jon Ronson (author of THEM, an exposé of conspiracy theorists, political extremists and other fellow travellers). It was very interesting; the programme was about the US military's paranormal research programmes, hatched in the heady collision of the post-Vietnam doldrums and the rise of Californian New Age spirituality. We met Lt. Col. Jim Channon, a wild-haired, wide-eyed hippy shaman-type who wrote the fantastically new-agey (not to mention lavishly illustrated) "First Earth Battalion" report, which envisioned a new US Army trained to sense plant auras and be at one with the universe; into confrontation, they would carry baby lambs, and wear loudspeakers from which emanated indigenous music and words of peace; if things got really heavy, this would change to discordant acid rock. Anyway, Channon's ideas inspired a lot of others to begin various less peaceful project, including the Fort Bragg "Goat Lab", where Special Forces would practice staring at goats and killing them with their psychic energy. One of the practitioners of this (now running a dance studio in the Midwest) claimed to have recently killed a hamster with psychic energy. Apparently he is being brought out of retirement to assist in using psychic energy to interrogate Iraqi insurgents, hopefully preventing another Abu Ghraib incident, or so he claims.

The convincingness of this programme was varied; parts of it, like the chakra-point weapon adapted from Channon's teachings and apparently being used to bloodlessly defeat Iraqi insurgents in hand-to-hand combat, looked like it could work, perhaps along similar principles to acupuncture or pressure-point tactics. The goat-staring and hamster-staring videos, however, seemed rather ambiguous; in both cases, nothing seemed to happen on the screen, though excuses were given (the goat experiment was only aiming for a "level 1" effect of lowering its heart rate, and the hamster could have been interpreted as collapsing and then trying to flee its cage; the experimenter didn't show the video of it dying, in case the Guardian columnist Ronson was a "bleeding-heart liberal").

Anyway, there are two more parts in this programme, not to mention a book titled The Men Who Stare At Goats, which should be interesting.

The US's most highly decorated soldier, David Hackworth, argues that, despite denials from the Pentagon, a return of the draft is inevitable:

Clearly, this war against worldwide, hardcore Islamic believers will be a massive military marathon, the longest and most far-flung in our country's history. By Christmas, more troops could be needed not only in Iraq and Afghanistan, but wherever the radical Islamic movement is growing stronger, from the Horn of Africa to Morocco, Kenya, Somalia, Yemen and across Europe -- remember Spain?! -- to Asia. Accordingly, we need to bring our ground-fighting and support units to about the strength they were before the Soviet Union imploded, especially since the proper ratio of counterinsurgent-to-insurgent in places like the Middle East should be around 15 to 1. You don't have to be a Ph.D. in military personnel to conclude we need more boots on the ground.

I led draftees for almost four years in Vietnam and for several years during the Korean War. If well-led, there are no finer soldiers. Ask the Nazis, the Japanese and the Reds in Korea and in Vietnam, where "no value" draftees cleaned their clocks in fight after fight. Israel, a country that has lived under the barrel of the Islamic terrorist gun for decades, has the most combat-experienced counterinsurgent force in the world -- and boy and girl draftees are its major resource.

To which, Counter Spin adds the suggestion that, when the US reintroduces the draft, a re-elected Coalition government will follow suit in Australia.

Is the US military moving quietly to bring back the draft, to supplement overstretched troop numbers in Iraq?

"The experts are all saying we're going to have to beef up our presence in Iraq," says U.S. Rep. Charles Rangel, the New York Democrat. "We've failed to convince our allies to send troops, we've extended deployments so morale is sinking, and the president is saying we can't cut and run. So what's left? The draft is a very sensitive subject, but at some point, we're going to need more troops, and at that point the only way to get them will be a return to the draft."

If the US brings back the draft, I wonder how quickly Australia will follow and attempt to reinstitute conscription. If the US sets a precedent, I can't see John Howard choosing not to follow the lead. Though presumably they'd need to get it through the Senate, and thus to get Labor onside, which may be harder.

The US military-industrial complex's latest high-tech gadget: a bugle that plays itself. The bugle is fitted with a digital recording device which plays taps when a button is pressed, allowing military funerals to be conducted without the need to have a skilled bugler present. (via jwz) 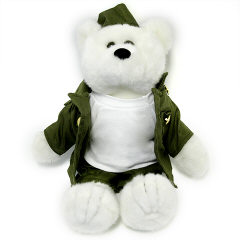