And today, in International Zionist Conspiracy news: the Iranian government has stated to the International Olympic Committee that it will boycott the 2012 Olympics unless the logo is changed, on the grounds that the logo spells the word "Zion" if you rearrange the elements of it, and thus is a coded assertion of British support for Israeli supremacy. Or perhaps Rastafarianism or something.

According to the state-backed Iranian Students News Agency, which is frequently used to convey official pronouncements, the letter says: "As internet documents have proved, using the word Zion in the logo of the 2012 Olympic Games is a disgracing action and against the Olympics' valuable mottos. There is no doubt that negligence of the issue from your side may affect the presence of some countries in the Games, especially Iran which abides by commitment to the values and principles."

Meanwhile, Hamas, the Iranian-backed Islamist group which rules half of the Palestinian territories, has vowed to prevent United Nations schools in its territories from teaching children about the Holocaust.

"We cannot agree to a programme that is intended to poison the minds of our children," said a statement from the ministry for refugee affairs. "Holocaust studies in refugee camps is a contemptible plot and serves the Zionist entity with a goal of creating a reality and telling stories in order to justify acts of slaughter against the Palestinian people."

Ging, a passionate advocate of the rights of Palestinian refugees and a vocal critic of Israel's policies towards Gaza, said Palestinian children needed to understand the great injustices of the 20th century, including the Holocaust, in order to fight legitimately for their own cause.

Recently, in the Middle East: Saudi Arabia has blocked Facebook, on the grounds that it doesn't conform with the kingdom's conservative Wahhabi Islamist values. (The big surprise: Facebook was apparently not blocked earlier. Given that even the relatively liberal Dubai blocks sites like Flickr, it's surprising that the Saudis have let their subjects wilfully poke each other online for so long.) The ban is said to be temporary; presumably Facebook doesn't usually contravene Wahhabi values.

Meanwhile, in the West Bank, Palestinian Authority police have arrested an atheist blogger after intelligence officers traced him to an internet café; 26-year-old Walid Husayin could get life in prison for heresy, though the Palestinian equivalent of the Daily Mail readership are calling for him to be put to death:

Husayin used a fake name on his English and Arabic-language blogs and Facebook pages. After his mother discovered articles on atheism on his computer, she canceled his Internet connection in hopes that he would change his mind.

Instead, he began going to an Internet cafe — a move that turned out to be a costly mistake. The owner, Ahmed Abu-Asal, said the blogger aroused suspicion by spending up to seven hours a day in a corner booth. After several months, a cafe worker supplied captured snapshots of his Facebook pages to Palestinian intelligence officials.

Officials monitored him for several weeks and then arrested him on Oct. 31 as he sat in the cafe, said Abu-Asal.

Apparently such intense surveillance of heretics is not unusual in the region; intelligence officers in both the relatively liberal West Bank and the hard-line Islamist-dominated Gaza work hard to hunt down dissidents, and even in Egypt, a blogger was charged with atheism in 2007 after intelligence officials monitored his posts.

A Palestinian man blew himself up in self-defence in a restaurant in Tel Aviv, according to a spokesman of the Palestinian Hamas government. The bombing was not organised by Hamas, though defended by them as "self-defence", to near-universal condemnation. Which suggests that they've given up on trying to convince the West that they're reasonable people. 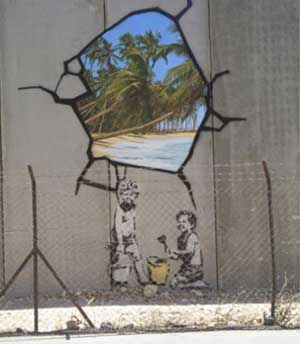 Among recent news stories: intelligence "chatter" suggests impending al-Qaeda terrorist attack, possibly timed to coincide with the US elections (could this be the much-speculated-about October Surprise?). Meanwhile, in Israel, a group of soldiers are being investigated over an art exhibition detailing the brutalisation of Palestinians; it seems (from the report) to be more a case of them acting as whistle-blowers than Lynndie England Mk. 2. In the United Nations, the US has given up on renewing its immunity from war crimes prosecution, after realising that they weren't going to get it; however, in Iraq, they are pushing for immunity from prosecution under Iraqi law, with, of course, the full agreement of the Iraqi people. And in England and Wales, authorities are re-examining more than 100 murders which they suspect of being "honour killings"; there appears to be a sophisticated infrastructure for such killings, with "bounty hunters" making a business out of tracking down victims.

I recently read a very interesting book (Where You're At, by Patrick Neate) about the spread of hip-hop culture from the inner cities of America to places like Japan, Brazil and South Africa, becoming a sort of lingua franca of globalised pop culture. Today I found an article which ties in to that, about multi-ethnic hip-hop in Israel, a scene which includes everybody from marginalised Arabs to Ethiopians and Moroccan Jewish rappers rhyming in French. I saw another piece some time ago about Palestinian youths on the West Bank taking to rap to voice their grievances; perhaps we really do live on a hip-hop planet.

Earthstation 5 is the newest file-sharing network to play whack-a-mole with the RIAA. This one's different; for one, its servers are hosted in a Palestinian refugee camp, rendering them immune to RIAA lawsuits. (Though presumably not Israeli missiles.) The service is legal under Palestinian copyright law, which offers very weak protection to foreign copyrights. I wonder whether this will diminish any sympathy the US has towards the Palestinians, and perhaps prompt the Whitehouse to tacitly approve Israeli military operations it would have otherwise objected to. After all, intellectual property is at stake here.

This reminds me of the Bruce Sterling story in which China launched a devastating attack against the US economy by putting up massive servers hosting pirate copies of Microsoft Office and the latest Hollywood blockbusters, free for the taking. (via bOING bOING)

Those who thought that Tony Blair was completely spineless have just been proven wrong. The British government has threatened to put import duties on Israeli produce originating in the occupied territories to protest illegal settlements. Oooh; I bet Shazza's quaking in his boots.

A chilling look at the training of Palestinian suicide bombers, who are taught from very early childhood to seek martyrdom:

In Hamas-run kindergartens, signs on the walls read: "The children of the kindergarten are the shaheeds (holy martyrs) of tomorrow." The classroom signs at Al-Najah University in the West Bank and at Gaza's Islamic University say, "Israel has nuclear bombs, we have human bombs."

They also are promised something more risqué: unlimited sex with 72 virgins in heaven. The Koran, the sacred book of Islam, describes the women as "beautiful like rubies, with complexions like diamonds and pearls." In one of the passages of the Koran, it is said the martyrs and virgins shall "delight themselves, lying on green cushions and beautiful carpets."

"I know my life is poor compared to Europe or America, but I have something awaiting me that makes all my suffering worthwhile," says Bassam Khalifi, 16, a Hamas youth leader in Gaza's Bureij refugee camp. "Most boys can't stop thinking about the virgins."

One novel way of solving the problem of who controls Jerusalem: hand it over to God. Of course, if God fails to materialise or send His angels to personally take charge of the city, the problem of selecting His mortal representatives could be quite contentious.