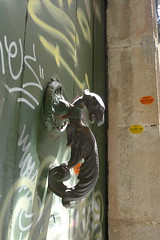 More information on a classic of psychoceramic literature, Pedro Carolino's English As She Is Spoke:

For embarking one's self:

Don't you fear the privateers!
I jest of them; my vessel is armed in man of war, I have a vigilant and courageous equipage, and the ammunitions don't want me its.
Never have you not done wreck?
That is arrived me twice.

Drinkings:
Some orgeat, some sirup, some paltry wine

Eatings:
Some black pudding, some sugar-plum, some wigs, a chitterling sausages, a dainty-dishes, vegetables boiled to a pap