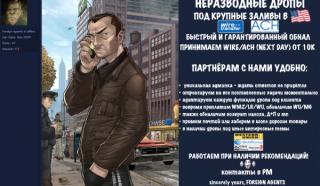 Unsatisfied with their portrayal in Russian TV serials, several Russian Mafia members have shot their own.

The program, called Spets, was shot by Vitaly Dyomochka, the owner of a shady car market who was sentenced several times for his activities. Everything in the show is designed to be genuine, with gangsters playing their own roles. Only the police are played by professional actors.

Another resourceful criminal use of the countless thousands of virussed Windows machines on the internet: online protection rackets, where the "businessmen" (predominantly from Eastern Europe) target a high-profile website and threaten to knock them offline with a massive DDOS attack unless they pay up. Online casinos (which make a lot of money and are in poorly-policed areas) are a popular target.

Most of the computers used are broadband-connected home Windows PCs owned by clueless people, of whom there is, sadly, no shortage; and it doesn't look like the problem is going to go away, at least not until a totalitarian "trusted computing" regime is imposed on the internet at the IP level, or something equally drastic happens. Which makes me wonder whether or not Microsoft are deliberately allowing viruses to flourish on their OS as to drive people into the highly profitable embrace of Big Brother.