This weekend, your humble correspondent went to the Cans Festival, a huge stencil art exhibition in a tunnel under the former Eurostar platforms of Waterloo Station. The festival organisers took the entire road tunnel and transformed it into a gallery, with artists from all over the world painting pieces (most involving stencilling, though a few being paste-ups) along its length. The most publicised name attached to the exhibition was, of course, Banksy, and he had a number of works there; as well as some stencils, he was responsible for a sitting-room installation with derelict sofas and an old piano made available to the public and a number of "remixed" classical statues. Though there were several dozen more artists, and indeed, anyone could come along, register and add their artwork to the exhibition. (On Saturday evening, a section of the passageway was sealed off from the general public and made available only to registered artists, who were busily adorning it with stencils.)

Anyway, here are a few photos; the entire set is here: Here is a gallery of stencil art from Buenos Aires. Much of it is fairly political, and not too dissimilar in spirit to Australian stencil art.

A newly released book has dubbed Melbourne the stencil art capital of the world:

London's street art guru Tristan Manco, whose books include Stencil Graffiti and Street Logos, vouches for the vigour of Melbourne's stencil art scene — with one qualification. "To take on the title of 'best stencil graffiti scene in the world', Melbourne would have to have a showdown with Buenos Aires in Argentina — the scene there has reached critical mass right now, with a fiery political and creative passion."

This title could be short-lived, though, with the Melbourne City Council and Victorian government adopting a Giuliani-esque zero-tolerance policy towards graffiti, in order to sanitise Melbourne for the Commonwealth Games, as well as the new sedition laws allowing more severe penalties for some political statements (the one of Philip Ruddock's head with "Insert Bullet Here", for example). Though, as some say, the hard-line zero-tolerance approach could backfire, by replacing Melbourne's characteristic stencil art with ugly, mindless tagging

But the State Government and Melbourne City Council's hardline approach to graffiti will backfire, according to Smallman and the stencil artists and result in a proliferation of one of the most detested forms of graffiti — tagging, which can be done in five to 10 seconds. 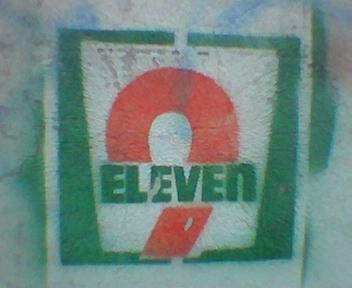 (Every Sunday, I put up a selection of photographs from my archive, taken between 2002 and now, with a specific theme or motif.)

Stencil Revolution has a lot of resources on stencil graffiti/art, incuding tutorials and EPS files of artwork. 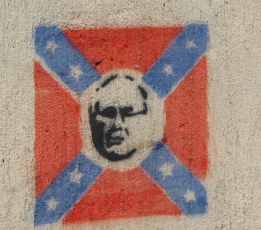