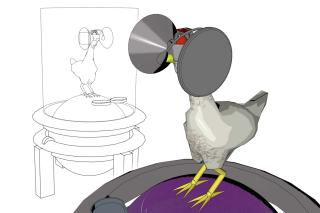 Second Livestock, something which purports to be a company using virtual reality with “animal-centric design” in animal husbandry, allowing chickens to live happy and fulfilling “virtual free range” lives in efficiently small, tightly-packed spaces, much like the urban office workers who will eventually eat them:

The enclosures are built to provide a comfortable and healthy home. Omni-directional treadmills provide livestock with the freedom to move freely in the virtual world. Each enclosure has independently filtered air to keep communicable diseases and parasites from spreading throughout the facility. The birds are fed a diverse, organic free range diet.

The small and lightweight Animal-Computer Interfaces are designed to fit comfortably and allow chickens a full range of motion.

The design of our facilities allows them to be located anywhere, even in urban centers. It is even possible to retrofit an empty office building. After all, Second Livestock is modeled on human activities such as the layout of the common corporate office. A networked grid of cubicles with internet access is not far removed from the enclosures we build for our chickens. However, our chickens likely get more exercise while on the job.

Second Livestock is, of course, not (yet) an actual product, but a social experiment by an associate professor from Iowa State University, intended more to start a discussion about the social implications of technology.

Sweden expands its soft power yet further, by becoming the first country with official diplomatic representation in Second Life. The Swedish embassy in the multiplayer environment won't actually issue passports or visas, but will tell people where to get them in the real world First Life, and provide information about Sweden.

Nash Baldwin, a Californian doctor, is using virtual reality to simulate schizophrenia, allowing those close to schizophrenic patients to know what their loved ones are experiencing:

Things change, as you approach them, but the shift is subtle. A poster suddenly shifts to contain obscenities; a single word in a newspaper headline suddenly becomes the only word you see. A bookshelf seems to contain nothing but volumes about fascism. And most disturbing to me, a bathroom mirror which contains your reflection becomes, when you come closer, a bloody death mask. The man in the mirror is actually a model, but the hallucination is based on the testimony of a schizophrenic who stopped shaving, because when he looked in the mirror, he'd see his corpse staring back at him. (And when you get close enough to the sink, you hear the strains of bagpipes -- because this is the music the man heard too, when he glimpsed his own death.)

Short term, Baldwin's goal is to build up a library of hallucinations, so that the experience of individual patients can be recreated with fairly accurate specificity. The practical applications, however, are still somewhat inchoate. "Is there any therapeutic use for this?" Baldwin asks rhetorically. "We have no idea, it hasn't been tried.... it's worth a shot." He's also pondering the idea of putting non-schizophrenics through the experience, while they're hooked up to an MRI imaging system, to see if hallucinations affect the same areas of the brain as a schizophrenic, during an episode.