Gini coefficients for Europe and America 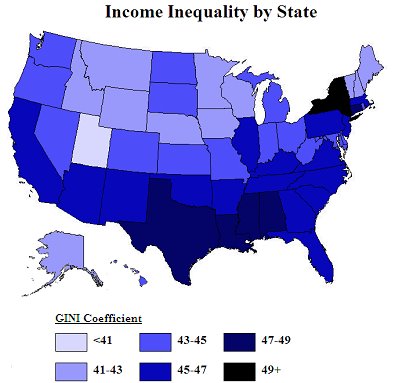 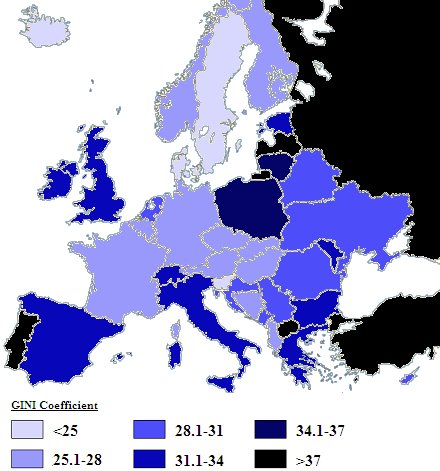 There are 4 comments on "Gini coefficients for Europe and America":

I hope someone appreciates the irony that the GINI index of the entire US is higher than any of Europe's functioning and sustainable 'social democracies' (including Russia) ---- although the color coding of the US chart and European chart suggests that there is some parity.

The US as a whole is 'off the charts' in high GINI (high inequality) with any other advanced industrial, so-called democracy --- and is only comparable to what used to be called South American banana republics' (most of which are now better than the US in GINI ratings, and with current African military dictatorships, and Middle Eastern plutocratic royal family oil monarchies.

In fact, at 0.49 and rising fast in GINI Coefficient, the US is closer to Robert Mugabe's autocratic dictatorship of Zimbabwe (at 0.53) than with any real democracy ---- which strongly suggests, that the US is not a democracy at all, but only a disguised ruling-elite 'corporate financial Empire'.

Only a suggestion but I think that you might, perhaps, want to rewrite a little bit of this.

The US numbers are before the effect of taxes, redistribution and benefits.

The European Union numbers are after the effects of taxes, redistribution and benefits.

On pure market income, which is the US numbers you're using, both Germany and France are more unequal than the US.

It is also true that the US is more unequal than the Europe after taxes and transfers. But nowhere near as much as you're showing. More like .38 or so for the US.

Do you have a cite for that, or is it just a case of “some guy on the internet says so”?

The US map is based on Census data and, while I've not had an exhaustive read-through, the figures certainly do appear to be pre-tax. The Europe figures come from Wikipedia, and if you look at a country which Wikipedia provides pre- and post-tax figures for (like Turkey), you'll see his figures do indeed match the post-tax figures where available.

So I'm afraid Tim's right about post- and pre-tax. It doesn't invalidate your argument by any means, but it means things are very bad rather than catastrophic.

Wikipedia indicates France is *slightly* better-off for pre-tax inequality than the US (.483 vs .486) but US is far from the worst-off democracy pre-tax: behind it we have Mexico, Israel, Germany, Portugal, Chile, and Italy.