The Dashboard project looks quite interesting. It's a bit vague (the only documentation is a developer's diary, with screenshots) but it appears to involve applications (terminal windows, mail programs, IM clients) sending XML-based "cluepackets" to each other, looking up information related to the subject at hand and then sending it to a "dashboard" sidebar for display; i.e., if a friend's ID appears in GAIM, a cluepacket is sent off to various agents, which match it against their address book card, and the dashboard shows their message logs and the RSS feed of their blog. It's a GNOME thing; not sure whether it's integrated into the GNU Network Object Model (whatever that is) or whether non-GNOME applications can play as well. It's good to see open-source developers trying something novel rather than just chasing taillights and trying to implement a GPLed equivalent of your favourite Microsoft/Adobe/Electronic Arts title, only five years later. (via Oblomovka)

A US-born Australian academic has told the Fulbright Symposium that there's a 20% chance of Australia joining the U.S. in the next 50 years; if al-Qaeda attack Australia or Indonesia becomes an Islamic fundamentalist state, this increases.

Dr Mosler told the 2003 Fulbright Symposium at Griffith University yesterday that he decided Australia was "an unreformable society" after the loss of the 1999 republic referendum. Australians, he said, had no flag of their own; a weak sense of nationhood; no prime minister in the Lodge, with John Howard living in Sydney; no national bushfire or water plans, even with the worst drought in history; and no "broad knowledge of nation in public discourse or popular culture". Australians had replaced "Empire with Yanks" after 1942, and the country retained a "quasi-colonial status".

Does this mean we all get guns and oversized SUVs and legislated morality (oops, we've already got that) and Clear Channel radio stations in every city? I wonder if we'll get a Bill of Rights (rather than it being conveniently harmonised out of the equation, much in the way that Jefferson's fair-use copyright provisions don't apply to digital media). Though would the Yanks have us?

After ten years on the high seas, a flotilla of plastic bath ducks is about to make landfall on the shores of Nova Scotia. The ducks, which originally numbered 29,000, were lost at sea when a container broke open during a storm in the Pacific; they have since floated around the Pacific, crossed the Bering Sea and entered the North Atlantic.

More on the Tulip/Commodore 64 thing: they're pretty much ruling out taking down non-profit sites, threatening open-source emulators or doing anything else to piss off the fan community (and quite wisely). Oh, and they're the mob who tried to sell a 486 Windows PC with a C64 emulator as the "new Commodore 64" a few years ago. (Which sounds like a daft idea, but is it any more so than marketing a new designer luxury car as a "VW Beetle" or "Cooper Mini"?) 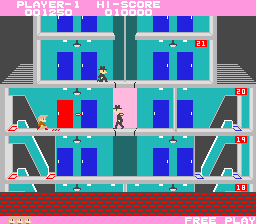