A Salon article looking into the bizarre parallel universe of Christian apocalypse movies, with B-list actors and plots lifted from Hollywood blockbusters, only infused with an odd mix of fundamentalist separatism, end-times paranoia and smug digs at liberals, atheists, evolutionists, new-agers and others.

it's set in a deserted observatory (erroneously referred to in the movie as a "space station") where everyone's worst sin emerges. Then a weary-looking Judd Nelson realizes what's going on: SETI@Home, the distributed-computing project for analyzing signals from space, is functioning as no less than Satan's own peer-to-peer AudioGalaxy network.

When a signal arrives with a suspicious duration of 6.66 seconds, the usual archetypal characters from rapture movies have their own plans for it. Louis Gossett Jr., as a power-mad general, wants to control it. A crackpot New Age radio host -- the kind of comic-relief character only found in Christian entertainment -- begins raving about how the signal will "evolve" humans to a "higher consciousness" (evolution frequently appears in these movies in conjunction with madness.) The eyebrow-cocking "dot-com billionaire" wants to sell it, exclaiming: "It'll be the biggest webcast in history!" And the lusty TV reporter, naturally, wants to corrupt Judd.

Sounds like it could make for quality bulldada. (via Plastic)

Graffito seen in mens' toilets at the Rob Roy: 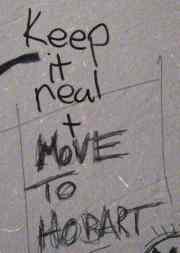 The Greek government just passed a law banning all electronic games, with heavy fines and prison sentences for possession of the forbidden devices. This law applies to everything from mobile phones with integrated games to DVDs with promotional game components, not to mention standard Windows installations, online chess games and so on; its purpose is to protect the virtuous Greek citizenry from the corrupting influence of online gambling, which the government has admitted to being unable to separate from other forms of games. (via Found)

Today's sonic atrocity from the Melbourne Central station PA system: Charles & Eddie, Would I Lie To You. Urgh, Blue-Eyed Soul; sort of like boy-band R&B for old fogies.