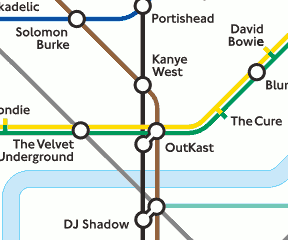 An artist named Dorian Lynskey has created a music-themed London Underground map, in which stations are artists and lines are genres.

I started out with a packet of coloured crayons, four sheets of A4 taped together and a big box of doubt, but the different character of each line quickly lent itself to a certain genre. Pop intersects with everything else, so that had to be the Circle Line; classical music for the most part occupies its own sphere, which made it perfect for the Docklands Light Railway. There were a couple of false starts but by the end of one afternoon I had assigned genres to almost all the lines and thrashed out most of the major intersections. The key stations naturally went to the most eclectic artists, not necessarily the most important: the Beatles may be more significant than Beck but even their most devoted fan must admit that they never tried rapping.

I also followed chronology wherever the path of the line allowed it. Each branch line represents a sub-genre: rock sprouts off into grunge and psychedelia when it reaches South-West London; hip-hop diverges, north of Camden, into old school and New York rap. If I was really lucky, the band name echoed the original station name: Highbury & Islington became Sly & the Family Stone.

Other people will quibble with omissions - it's a shame, for example, that the Circle Line constantly runs in tandem with either the District or Metropolitan lines, thus leaving no room for pure pop acts such as Kylie Minogue and the Pet Shop Boys. I should also point out that, to keep my head from exploding, I limited the remit to western, predominately Anglo-American music. Then there are those changes necessitated by London Underground's understandable sensitivity to explosive references: arrividerci, Massive Attack. For some reason, they also took exception to the late rapper Ol' Dirty Bastard.

There is a PDF of the map available from the article; and copies can be purchased from the London Transport Museum for £7.95.

Today's heartwarming story of interspecies friendship: In Brazil, a cat has befriended a bird which hurt itself when it fell out of its nest; the cat then raised the bird as its own. It is there that the story becomes somewhat twisted: the bird helps out its new friend and stepmother by luring other birds where she can catch and eat them, and has also learned to eat meat. (Whether the meat comes from other birds was not mentioned.)