As water levels in Britain's reservoirs decline, a London local government is taking action to improve efficiency. Among new planning measures announced by Barnet borough council is a plan to require new homes to have only showers and not baths. The Times weighs in on why this is a threat to the British way of life and a cherished institution alongside tea and the Shipping Forecast:

Bathing is a therapy, a way of easing aches and pains, relaxing weary muscles and helping a tired brain to expand after a day of contracting. We don't expect that we will suddenly come up with a modern Archimedes principle. Or, indeed, remember exactly what it was about bodies and fluids that Archimedes puzzled out. But Eureka moments do come in the bath. A blast under a shower is better for displacing cobwebs and helping the brain to focus on immediate tasks at the start of the day. But if you need to ponder a knottier, big-picture problem, a long evening wallow in the bath is the best way of going about it.

Friends of the Earth say that the Barnet bath initiative "is probably the shape of things to come". But is it really? We are always being told that showers use less water than baths. Thames Water says that one bath uses 80 litres of water and is the equivalent of two five-minute showers. But power showers can use more water than baths. I doubt many people will trade in their power showers, and why should they? Ordinary showers are a false economy. Trying to get clean under the feeble jet can take all day.

The odd thing is that, while councils are talking about measures such as eliminating baths from homes, most British houses still don't have water meters, and whenever the introduction of such meters is mooted, a vocal minority raise a fuss as if their fundamental human rights were about to be violated. 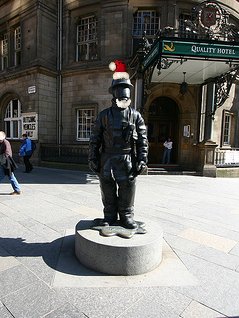