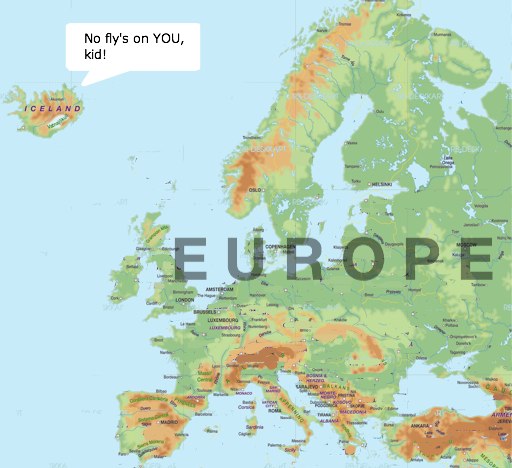 A week ago, the Icelandic volcano Eyjafjallajökull started erupting, spewing a vast cloud of glassy ash into the stratosphere, and imposing a total no-fly zone on most of Europe. Now, flights are beginning to reopen (though by no means across the board; the flight your humble correspondent was scheduled to be on this afternoon, from Gothenburg to Heathrow, remains cancelled); scientists, however, say that the volcano is likely to keep erupting for some time, and some say that we can expect decades of increased volcanic activity in Iceland, meaning that there may be more flight disruptions to come.

This has had somewhat more of a personal impact on me than most things in this blog; on the day I was due to fly out to Copenhagen (for the Copenhagen Popfest), I woke to find that all flights were cancelled. After a few hours of incredulous reload-clicking, I booked expensive trains to Cologne (this was in the early hours of the disruption, before Eurostar was booked out for days to come); the following day, I caught a Eurostar to Brussels and a Thalys train to Cologne (there were no seats available on it; I spent the journey propped up in the dining car, somewhat closer to a hyperactive, tantrum-throwing toddler than I would have liked). I had been unable to book onward trains from London, but was advised to try the ticket office in Cologne; there, I was advised that the sleeper train was booked out, and that my best chance was to board it and bet on buying a ticket onboard. I did so, and somehow managed to end up in Copenhagen the following morning.

Right now, I'm in Paris, staying at a friend's place before making the journey back to Blighty; I made the decision to not go to Gothenburg (even further from London, since competition from Ryanair killed the ferry to Newcastle; let's hope that it gets reinstated soon), and caught a ride with a friend to Brussels. (Note to self: next time you're likely to be in a car on the Autobahn, bring some CDs of Kraftwerk and Neu! to put on.)

(It's somewhat ironic that a year ago, I holidayed in Iceland, and now, Iceland disrupted my holiday.)

For those stuck on the wrong side of the English Channel, there are ways across; it's true that the Eurostar's booked solid for days (and expensive to boot), as are coach services and the Calais ferry, but last time I checked, the Caen-Portsmouth ferry still had seats available.

Let's hope that this leads to some more redundancy in modes of transport in Europe; the continent has sacrificed a lot of (slower) modes of surface transport for the speed of air travel. (The lost ferry routes are one casualty; meanwhile, Britain has run its railways down, accepting the free-market wisdom that it makes more sense to fly from, say, London to Edinburgh than to spend four and a half hours on a train), which has left its transport systems dependent on one modality and, as we have seen, fragile. The results can be seen in the desperate queues of people at railway stations and the escalating credit-card bills of those involuntarily extending their hotel stays.

Finally, here is a Christopher Hitchens piece on the Eyjafjallajökull eruption and Iceland in general.