Some nutter has been placing pipe bombs in mailboxes in the US midwest, along with letters about why death is an illusion perpetuated by the government to instill obedience. Now it turns out that the bomber may be the frontman of a grunge band named Apathy. Perhaps it's a case of terrorism being the last true form of performance art, to paraphrase Laurie Anderson. 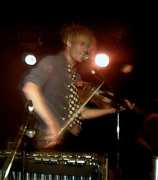