The Chaser has an amusing poll: "Where will the kid who plays Harry Potter be in 5 years time?"

Silicon Valley, an area with a high concentration of engineers, hackers and technical specialists, is seeing a dramatic increase in diagnoses of autism and Asperger's Syndrome. This suggests that the colloquial links between the conditions and technical pursuits may in fact be provable; and that in sufficient concentrations, those who may otherwise have been prevented from breeding by not getting mainstream society will find similar mates -- and their children may be more severely affected.

Says Bryna Siegel, author of The World of the Autistic Child and director of the PDD clinic at UCSF, "In another historical time, these men would have become monks, developing new ink for early printing presses. Suddenly they're making $150,000 a year with stock options. They're reproducing at a much higher rate."

"Autism gets to fundamental issues of how we view talents and disabilities," he says. "The flip side of dyslexia is enhanced abilities in math and architecture. There may be an aspect of this going on with autism and assortative mating in places like Silicon Valley. In the parents, who carry a few of the genes, they're a good thing. In the kids, who carry too many, it's very bad."

For all we know, the first tools on earth might have been developed by a loner sitting at the back of the cave, chipping at thousands of rocks to find the one that made the sharpest spear, while the neurotypicals chattered away in the firelight. Perhaps certain arcane systems of logic, mathematics, music, and stories - particularly remote and fantastic ones - have been passed down from phenotype to phenotype, in parallel with the DNA that helped shape minds which would know exactly what to do with these strange and elegant creations.

Some memes just keep going: Seen on a mX dispenser (that's the free murdoch full of celebrity stories, consensus-reality-reinforcing propaganda and other pinkness and horror) in Museum Melbourne Central station: 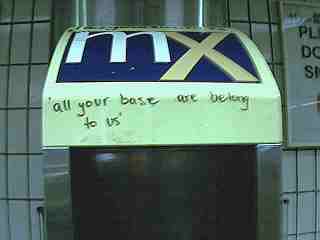 ¶ all your base graffiti melbourne murdoch photos 2

"My first thought was 'bin Laden, terrorist attacks in Australia'," he told reporters. "And then I saw the Greenpeace (sign) and I thought 'oh that makes sense'."

A study at the Mayo Clinic in Minnesota has found that prayer makes no difference to patients' recovery rates; at least, if the patients don't know about it. Half of the 799 heart disease patients in the study were prayed for without their knowledge, and the other half were not, and researchers found no difference between the two groups' recovery rates.