The latest thing to do on the London Underground: swapping station names around on maps, confusing tourists: 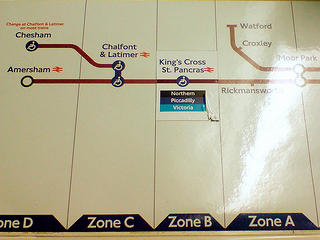 A piece on counter-surveillance tactics used by terrorist suspects. In summary, they go out of their way to appear assimilated and un-religious, discuss plans in remote wilderness locations or online pornography sites (what, no Second Life/World of Warcraft?), use Skype (which is difficult to tap) and speak in code:

Wiretap transcripts and other court records show that the cell of North African immigrants tried hard to blend into Italian society, working regular jobs, sending their children to public schools and taking pains not to appear unusually religious. When they did talk on the phone, they often adopted a roundabout or obtuse manner that masked their real meaning.

"Taxi drivers," Redouane el Habab said, referred to suicide bombers; explosives were "dough." Anybody who had to go to "the hospital," he added, had been taken to jail, while those visiting "China" were really attending training camps in Sudan.