When life gives you lemons, make lemonade. When life, however, gives you a two-legged piglet, do what Wang Xihai did and train it to walk balletically: 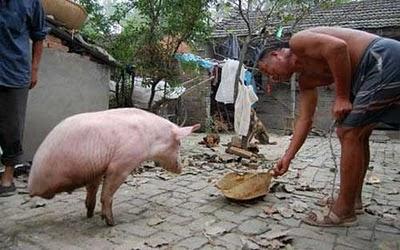 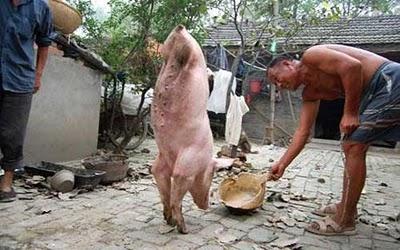 Facebook has just upgraded its photo sharing feature, increasing the maximum dimension along either axis from a miserly 720 pixels to 2,048 pixels, improving tagging and adding a lightbox interface. Some are saying that the upgrade poises Facebook to challenge Flickr as a serious photo sharing site (Facebook already hosts more than three times as many photos as Flickr does); however, the fact remains that photographs on Facebook still have a distinctive "Facebook style":

A few days ago I ran into one of my nieces whom I hadn't seen for a while. She's a lively, sociable young woman and had recently returned from spending an enjoyable summer in Cape Cod. I asked if she had any photographs. "Sure," she said, launching her Facebook page, where there was an album of 150 images, which on inspection turned out to be a succession of more or less identical images of young men and women wearing silly grins and making faces at the camera.

Two things struck me about this album. The first was that it contained not a single image of Cape Cod. The other was how her photographs reminded me of those which appear on the Facebook pages of my own teenage children – which leads one to conjecture that there is now a "Facebook style" of photography, as distinctive in its way as that of the passport or wedding photograph.

(The Facebook Style is not to be confused with the MySpace Angle, though it's presumably possible for a photograph to meet the definitions of both.)

Among Facebook's 15bn photographs there are, no doubt, some memorable and beautiful images, but to date I haven't seen any. That's not true of Flickr, which continues to be one of the wonders of the world and hosts hundreds of thousands of terrific pictures. More significantly, an increasing proportion of them are published under a Creative Commons licence, which means that they can be freely used for non-commercial purposes.

In any case, while Facebook's photo sharing tools may be improved, it is unlikely to become a Flickr-killing platform for strikingly beautiful photographs, for reasons of culture and function. Facebook is, after all, primarily a social site; its strengths come from the ability to share things meaningful to one's friends, which would be tediously mundane or irrelevant to anybody else. Few people are interested in identical mugshots of strangers gurning at the camera in pubs or backyards, though the family members and chums of the gurners in question probably are.

Flickr, meanwhile, is a site for publishing photographs, where the photographs are the primary focus. It has social features (users can favourite or comment on photos with their pseudonymous Flickr account IDs, and add other information about themselves), but they are secondary to the application of showing photographs. To wit, Flickr not only has keyword tags but also groups, with themes such as "sunsets", "wide-angle photos", "things which are red", or "Paris", where users can send their photos, making them available for viewing by strangers who share an interest in their theme. This is not something Facebook is good at. (Mind you, it goes both ways; Flickr recently added the ability to tag other Flickr users in photos, though that doesn't seem as useful as Facebook's person-tagging feature; unless one hangs out only with keen photographers, one's friends are unlikely to be on Flickr.) I don't think Facebook is going to eat Flickr's lunch any time soon. (Nor, for that matter, is Google's Picasa, nor any of the Flickr-alikes like Zooomr or Ipernity.)

And while we're on the subject of beautiful photos on Flickr, Ffffl*ckr is a new web-based tool which, given access to your Flickr account, will find other photos you are likely to like, by looking at photos your favourited and seeing what their takers favourited.