An Israeli company has developed CD-ROMs which cannot be copied. The CDs contain a smart card with a photodetector and LED and a chip containing a decryption key; to decrypt itself, the software requests the key from the card. Though I'm skeptical about the practicality of such a system; CD-ROM drives are read-only devices, and whether or not the software can control the laser enough to communicate with the chip (to send requests for codes) seems rather uncertain, given that it's not part of any standard that drives have to comply with.

A sobering interview a professor of psychology who has studied the psychology of genocide, or why ordinary people commit atrocities. Eye-opening, and not optimistic; basically, his thesis is that the line between everyday civilisation and genocide is rather thin; that it's very easy to dehumanise an "enemy", thus enabling ordinary people to commit atrocities against their now no-longer "human" foes and still see themselves as good people, and that genocide is not, as is widely believed, an intrinsically male specialisation.

And in the Holocaust you had incidences of this, too -- I'm thinking of Jan Gross' book, entitled "Neighbors," about a small village in Poland named Jedwabne where the Catholic half of the village killed the Jewish half simply because they were given permission to do so. You realize how thin this veneer of civilization is that we put up. We say we live as neighbors and in a community, but when something happens structurally that says now you have permission to persecute, to take from, to even kill people that you've lived with for years, the relative ease with which people can do that is incredible.

It's one thing to understand killing, but killing with brutality and killing with zest and killing by taking trophies as American soldiers did with massacres of American Indians, is another thing. Why is that necessary? You'll even notice that in executions throughout World War II, the person's back is always toward the executioner. There really is no logistical reason for that in terms of ease of killing, it's more just a psychological defense of not having to see the victim.

And, according to Waller, genocide and other atrocities are likely to increase as more people compete for fewer resources.

Q: What is the greatest superpower in the world which "annexed" each and every country, a military secret in many countries, runs on MS Windows, prevents cheating, fraud, fooling, nepotism, hegemony, corruption, illiteracy, confusion, ignorance, monopoly and computer insomnia, and takes about "9000000 (9 million) years" to read and understand? A: Linux.

Also on this page, the truth about baby universes, and why you don't really exist, alongside useful links for buying Linux-related books. Could this be the Dr. Bronner of software? (via Charlie's Diary)

Another one of those Rolling Stone top-50s; this time Rock's 50 Greatest Meltdowns. This is that peculiar Clear Channelised definition of "rock" which encompasses the likes of Michael Jackson, Jewel and Mariah Carey. (via Reenhead)

Luke has written a review of the new one by above-average (if somewhat pretentious) art-goth outfit Black Tape For A Blue Girl. I see Sam's still putting his girlfriends on his CD covers.

(Black Tape actually makes decent music, in a soundscapy sort of way (unlike all the we-want-to-be-Bauhaus/NIN/the Sisters bands which make up the goth genre), though is a bit melodramatic and over-the-top in places. Though presumably that's how you know that they're "goth" and not "post-rock" or something. I probably won't buy the new album though.) (via Cos)

The latest webcomic from e-sheep, the creators of the excellent The Man Guy I Almost Was and Delta Thrives: The Spiders, set in an alternate universe where the dot-com golden age never ended, and a humanist west under an idealised Al Gore fights the Taliban with open-source robots, benevolent AIs and Ecstasy-laced marshmallow drops. It's a sort of cyberhumanist utopian war on terrorism, diametrically opposed to Bush's secret government and ideology of Biblical Fascism and "total information awareness".

It may not be particularly plausible (for one, I doubt that machine-man Gore would have possibly been anywhere near that cool), but it looks pretty doovy. (via 1.0)

This evening I went to Nic of Dandelion Wine's birthday do at Chung On, a good (if stuck in the '70s decor-wise) Chinese restaurant in Moonee Ponds. A good time was had by all, with a lot of entertaining conversation (not to mention good food; the mango chicken is highly recommended). And the background music was quite amusing; just sufficiently loud to be audible during lulls in conversation, it consisted of an endless loop of ridiculously bland elevator-music instrumentals of pop songs (everything from George Michael's Careless Whisper, performed Kenny G-style, to Burt Bacharach's Raindrops Keep Falling On My Head; no Nirvana or Smashing Pumpkins covers just yet, but give them time). 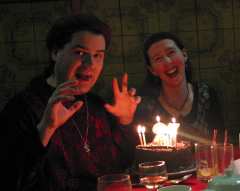 I was walking past Manny's in Fitzroy today, and stopped in, finding that they had a few items on sale. Hence, I ended up buying a copy of Waldorf Attack, the VST analogue rhythm synthesizer plug-in. (Something I had been meaning to get my hands on for a while; though the fact that it was on sale sealed it.)

It's pretty doovy; one can make all sorts of sounds with it, from analogue drum sounds to the sorts of bizarre noises found only in German laptop electro and Warp CDs, and miscellaneous odd burblings, hisses and insane ring-modulated cacophonies. And the fact that one of the preset kits it comes with is comprised of video-game sound effects is encouraging.

I laughed out loud when I heard the start of the "Beat Box 3" sample song, though; there it was: a perfect knock-off of the Casio VL-1 "Rock 2" pattern (that's the one from Ninetynine's Wöekenender).