On the iPhone, even calculator applications come with obscenity filters, blanking the display if, when the iPhone is turned upside down, the number shown resembles an obscene word. 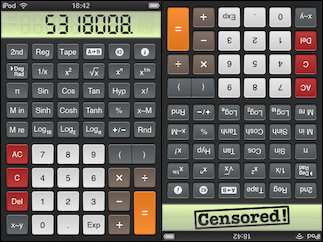 The author suggests, somewhat facetiously, that this is to get through the App Store's strict decency policies.

Evolutionary psychologist and language specialist Steven Pinker has an article on the neurology and psychology of swearing, how obscene language differs from regular language and whence it gets its power to perturb:

The upshot is that a speaker or writer can use a taboo word to evoke an emotional response in an audience quite against their wishes. Thanks to the automatic nature of speech perception, an expletive kidnaps our attention and forces us to consider its unpleasant connotations. That makes all of us vulnerable to a mental assault whenever we are in earshot of other speakers, as if we were strapped to a chair and could be given a punch or a shock at any time. And this, in turn, raises the question of what kinds of concepts have the sort of unpleasant emotional charge that can make words for them taboo.

The historical root of swearing in English and many other languages is, oddly enough, religion. We see this in the Third Commandment, in the popularity of hell, damn, God, and Jesus Christ as expletives, and in many of the terms for taboo language itself: profanity (that which is not sacred), blasphemy (literally "evil speech" but, in practice, disrespect toward a deity), and swearing, cursing, and oaths, which originally were secured by the invocation of a deity or one of his symbols.

Ths secularization has rendered religious swear words less powerful, creative speakers have replaced them with words that have the same degree of affective clout according to the sensibilities of the day. This explains why taboo expressions can have such baffling syntax and semantics. To take just one example, why do people use the ungrammatical Fuck you? And why does no one have a clear sense of what, exactly, Fuck you means? (Some people guess "fuck yourself," others "get fucked," and still others "I will fuck you," but none of these hunches is compelling.) The most likely explanation is that these grammatically baffling curses originated in more intelligible religious curses during the transition from religious to sexual and scatological swearing in English-speaking countries:

Pinker goes on to discuss the correlation between the hierarchy of obscene words functions and the disease-carrying power of the substances involved, the social forces behind sexual taboos, and concludes that, since obscene language does have power, it should neither be proscribed outright nor used thoughtlessly:

The common denominator of taboo words is the act of forcing a disagreeable thought on someone, and it's worth considering how often one really wants one's audience to be reminded of excrement, urine, and exploitative sex. Even in its mildest form, intended only to keep the listener's attention, the lazy use of profanity can feel like a series of jabs in the ribs. They are annoying to the listener and a confession by the speaker that he can think of no other way to make his words worth attending to. It's all the more damning for writers, who have the luxury of choosing their words off-line from the half-million-word phantasmagoria of the English language.

When Norman Mailer wrote his true-to-life novel about World War II, The Naked and the Dead, in 1948, his compromise with the sensibilities of the day was to have soldiers use the pseudo-epithet fug. (When Dorothy Parker met him, she said, "So you're the man who doesn't know how to spell fuck.") Sadly, this prissiness is not a thing of the past: Some public television stations today fear broadcasting Ken Burns' documentary on World War II because of the salty language in his interviews with veterans. The prohibition against swearing in broadcast media makes artists and historians into liars and subverts the responsibility of grown-ups to learn how life is lived in worlds distant from their own.

Former NME editor Paul Morley comments on the spectacle of Glen Matlock complaining about the amount of swearing on TV, and asks whether the former Sex Pistol, now a middle-aged family man, has turned against what he stood for, whether he really stood for it in the first place, or whether he has a point:

Clearly, Matlock has decided that as a musician, as an entertainer, he is going to grow old gracefully, even if this means spending most of his time as an unknown. He will not be an expletive-packing Pistol cursing freely into his 50s and 60s, committed to the cause of perpetuating a wild image even as the wrinkles deepen, the flesh softens and the desire crumples. Gene Simmons of Kiss, Alice Cooper, indeed Lemmy are not the right role models for Matlock as he approaches 50, which even if it is the new 40 is not really close enough to the magic years of the 20s where in the old-fashioned sense you can, in a dignified way, wreck yourself, and possibly elements of surrounding civilisation.

Then again, those of us who are watching rich celeb chef Jamie Oliver swear his way through his school dinners show actually might agree with Matlock that there really is too much swearing on television. Middle-of-the-road TV programming freely tosses in the obscenities to suggest there is grit and realism where really there is just frantic emptiness. Matlock might actually be anxious that the swearing is in the wrong mouths, that dull people are exploiting mock controversy as an easy route to commercial attention and that as an ex-Pistol who witnessed the Grundy incident he's responsible for that, and embarrassed by it.