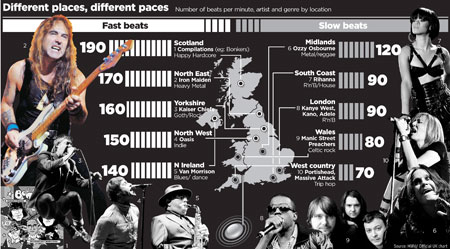 This just in: Robert "3D" Del Naja is not a paedophile. (Though the timing of the charges he was cleared of is suspicious; I wonder whether it was in fact all planned to put the frighteners on celebrity anti-war campaigners.)

Massive Attack frontman Robert "3D" Del Naja arrested for child pornography, as part of the same sting which netted Pete Townshend. Del Naja denied having downloaded child pornography; interestingly enough, the Graun article pointed out his involvement with the antiwar movement, as if to suggest that the arrest may be politically motivated.

A somewhat iffy review of the new Massive Attack album in the Graun. To be honest, I'd agree with much of it; a lot of the songs go on for too long and yet somehow seem somewhat flat, at least compared to Mezzanine. Though it's not all that bad an effort.

Indeed, on the only occasion when 100th Window props itself up and makes a point, you wish it had stayed supine. A Prayer for England concerns child abduction and murder - an issue virtually ignored by the media in recent years and thus in desperate need of the boost in profile that only a protest song on a chill-out album can deliver. It's certainly difficult to argue with the thesis - infanticide is a bad thing - but a point this facile hardly warrants O'Connor's finger-wagging fire-and-brimstone routine. By the second verse, she is addressing God as "Jah", an affectation that recalls a wackily hatted student reaching for his bong. At this point, one's thoughts do turn to murder, but not quite in the way the song intends.